Description
The compositions are based upon a recording of bell ringing at St Paul’s Cathedral, London, made while standing at the north side of building and facing west. The sound, produced by a ringing method called the Cambridge Surprise Maximus, is heard to reflect off the façade of Chapter House, opposite, and thereby produce a natural reverberation, delay, and doubling of the audio image. Four 3-second samples were extracted from the recording, of which two are used as the basis for the compositions here.  Thus, an individual sample preserves only a portion of the sequence of tuned bells.

The samples are divided into twelve consecutive sections (corresponding to the number of bells used to perform the ring), each 250ms long. These sections are reordered, digitally, following arithmetical systems of permutation derived from the principles of method ringing. In method ringing (which is a form of change ringing) each bell is given a number (1–12 in the case of the bells at the Cathedral). The sequence is permuted by swapping the position of two bells. For example, below: in the first permutation (line two), bell 2 sounds first and bell 1, second). In the second permutation (line three), bell 1 exchanges place with bell 3 and is played third. Over the course of eleven changes, bell 1 will move forward from the first to the twelfth position in the sequence:

Each sample is subjected to a specific permutation. Two 250ms sound sections are swapped (in the manner of the bells). Each sample has as many variants as required to explore all the permutations. (It is equivalent to completing a peal in bell ringing). Each variant is looped (mimicking the repetition of the melody in bell ringing) twelve times. In Sample 2/Permutation 2, the pair of numbers closest to each other, from the centre outward, change in each sequence: 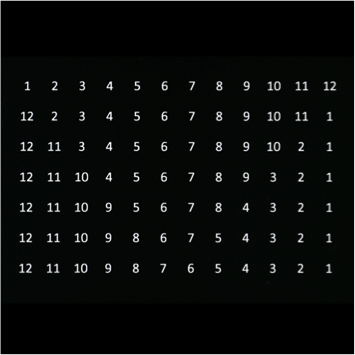 ​
In Sample 3/Permutation 3, the pair of numbers furthest from each other progress to each other’s position throughout the succession of sequences: 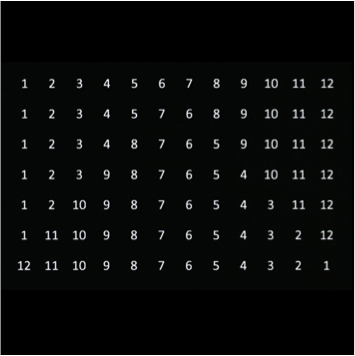 ​
In Sample 1/Permutation 1, a pair of alternate numbers change in each sequence: 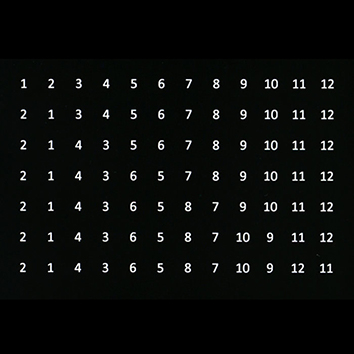 ​
In Sample 4/Permutation 4, a pair of numbers furthest from each other progress to each other’s position throughout the succession of sequences: 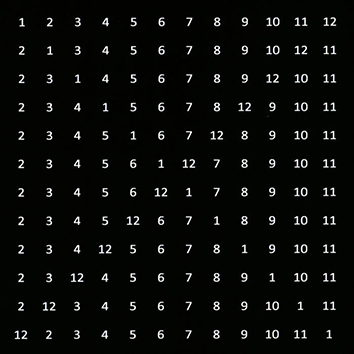 ​
In Christian theology, to convert (Greek: ἐπιστρέφω) is, variously, to change or adapt in form, or turn back, or turn one’s self about – which processes and mutation are precisely what the sequences governing the compositions have undergone.